Let us bring the history to you!

The Historical Society offers a variety of lectures that can be held at your location. HSP has presented at libraries, adult schools, retirement communities, clubs, and other organizations. Programs can also be offered online through Zoom (or your organization’s preferred platform.)

Speaker fee:
$100 per program
(additional mileage charge for travel outside a 15-mile radius of our museum.)

The Battle of Brooklyn
(60 minutes)

The Battle of Brooklyn, the largest battle of the American Revolution, took place just 1 ½ months after the signing of the Declaration of Independence, and was a crushing defeat for the Continental Army. The Revolution could have ended then, if not for favorable weather that allowed George Washington, under the cover of wind and fog, to safely evacuate his 9,500 men. Out of the ashes of this defeat arose the determination and perseverance of the Continental Army and its Commander in Chief; the tide was turned 4 months later when they defeated the Hessians at Trenton on Christmas 1776, changing the course of history.

This enlightening presentation examines the life of the man whose name has become synonymous with “genius.” Learn how a childhood fascination with a compass played a role in the development of the Nobel prize-winning scientist, how he accepted a job in Princeton to escape Nazi Germany and how he used his celebrity to advocate for civil rights and advance world peace.

Created to celebrate the 350th anniversary of the state, this program highlights the Lenape Indians and early European settlers, the development of cities and suburbs, as well as technology and inventions. This fun and interactive presentation includes a multiple choice game to identify N.J. facts, symbols and local celebrities.

Princeton and the American Revolution
(60 minutes)

Learn about Princeton’s early history and highlights of the American Revolutionary War up to the “10 Crucial Days,” culminating in the Battle of Princeton on January 3, 1777.  With many illustrative images, we will focus on the effects of the war on Princeton, and hear sometimes in the soldiers’ own words of their sacrifice, bravery and perseverance which led to the creation of our free nation.
Note: The two Revolution programs can also be combined into one 90-minute talk.

Princeton and the American Revolution: The Ten Crucial Days
(60 minutes)

This program covers the Continental Army’s disheartening retreat across New Jersey, and features the extraordinary events of the “10 Crucial Days,” starting with  Washington’s Crossing of the Delaware,  the Battles of Trenton, and the Battle of Princeton on January 3rd, 1777.  The Continental Army’s bravery, sacrifice, and perseverance through unimaginable difficulties, led to an amazing three victories in 10 days, changing the course of history and enabling the birth of our free nation.  Many illustrative images and quotes from the soldiers themselves are included.

Get into the Princeton spirit with a virtual tour of Princeton Cemetery, referred to as the “Westminster Abbey of the United States.” Hear the fascinating stories of some prominent members of the community (including a U.S. president and vice president), as well as extraordinary tales from the diverse men and women that called Princeton home.

Gargoyles can be found perched on Princeton University’s gothic arches and towers. Most are not true downspouts, but decorative designs ranging from historic, to symbolic, to just plain fun. This slideshow will provide a bird’s eye view of many of the stone creatures adorning campus.

The town of Princeton was settled more than 300 years ago. What has changed over the years, and what has stayed the same? Using images from the Historical Society’s vast photo archive, tour the town from the comfort of your seat and compare images of transportation, shopping, education and historic sites, past and present.

The American Revolution shooting war ended in 1781 and the Colonies were awaiting word that peace negotiations in Paris would result in a treaty.  Because of delays in negotiating across the Atlantic, Congress is in a dilemma. It has no money to pay the troops, but it cannot disband the army until there is a peace treaty. In June 1783, Congress, in session in Philadelphia, must flee after an Army mutiny (demanding back pay).  Congress relocates to Princeton, where it remains in session for 4 ½ months.  This is the story of the events that take place – and the people involved – as this small, rural town provides the backdrop for the historic events of that summer and fall.

Women’s stories are often more difficult to find in the historical record, or their identities are hidden behind their husband’s names. This program brings to light the contributions of some of the diverse and influential women in Princeton’s history, including immigrants, enslaved women, working women, and community leaders. Through their service to others, these trailblazers played key roles in the town’s development.

“The Historical Society’s marvelous program on New Jersey had my residents in awe. They enjoyed listening about the facts and seeing the pictures from HSP’s collection. The presenter was not only knowledgeable, but patient.” – Jennifer Soss, Escapades Producer, Brandywine 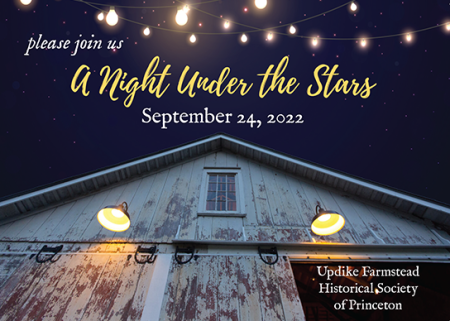