The 2021 Virtual House Tour has ended. Thank you for your support!

For 18 years, the Historical Society of Princeton has offered central New Jersey’s premier history, architecture, and design event – the House Tour. This year, we are thrilled to announce that we are taking our expertise in showcasing spectacular private homes virtual, with our first ever Virtual House Tour from May 15, 2021 through June 15, 2021.

This virtual event will feature on-demand, multimedia content of unprecedented depth for participants to navigate at their leisure throughout an entire month.  They will be able to delve into fabulous private art collections, explore the history of how neighborhoods developed, and traverse engaging spotlights on architecture and design. 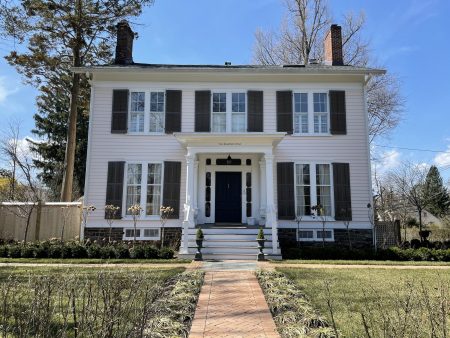 Prolific Princeton builder-architect Charles Steadman likely built this Federal/Italianate-style house in the 1850s at the corner of Nassau Street and University Place. As the University and town expanded, the house was moved twice before landing at its current location. House moving was a common practice in Princeton in the early 19th and 20th centuries, and nearly 200 buildings were moved during this period. Once home to Princeton University Professor Christian Gauss, beloved mentor to F. Scott Fitzgerald, the house has been completely renovated and restored by the current owners, creating a new sunlit kitchen and master suite, while also meticulously restoring period details, like intricate metal knobs and hinges, stunning pocket doors, marble fireplaces, and gas lighting petcocks. Creative décor and furnishings include delightful surprises, like a salvaged armoire used as a bar and pops of exciting wallpaper. Two historic cupolas bring even more light into the already sundrenched home. New landscaping and stone hardscaping surrounding the house create a charming, Charleston-inspired retreat for the homeowners. 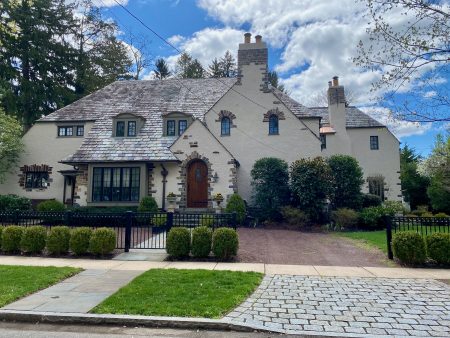 This English manor style house was originally built in 1924 for the family of Charles Erdman, Mayor of Princeton Borough and an influential supporter of many local institutions. The current owners, only the third family to own the home, undertook stylish updates throughout the house and completed renovations that enhance the flow for a 21st century family. They impressively converted a garage into an elegant dining room, installed a gleaming new kitchen, and merged bedrooms to create a splendid master suite with a sitting room and his/hers dressing rooms. Third floor servants’ quarters were combined to create a unique bedroom with custom cabinetry and closets built into the original dormered ceiling. The house exudes storybook charm, and original details, like moldings, French doors, and the 1920s doorbell, remain. Incorporated throughout the house are remarkable pieces of Asian art and furnishings from the family’s time living in Hong Kong. Outside, a picturesque loggia leads into the garden where the original garage doors, complete with Roebling hardware, form a focal point. 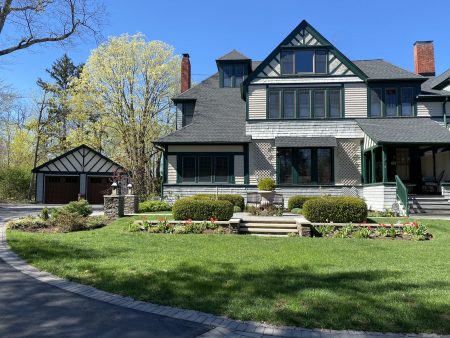 This semi-detached home is steeped in Princeton’s women’s history. Dubbed “The Pines,” the sprawling Victorian was once home to Evelyn College for Women, the first women’s college in New Jersey, founded in 1887. Later, Princeton’s first female mayor of Princeton, Barbara Boggs Sigmund, lived there until her death following a battle with cancer. The current owners undertook major restoration work and modernized the interior to allow for an open kitchen gathering space, a spacious master suite, and a third-floor recreation space with expansive views of Princeton. The renovation also breathed life into stunning historic details like large-scale double doors, a striking Japanese porcelain tile fireplace, clawfoot tubs, and original wood floors. The overhauled front and back yards create a number of unique spaces for outdoor lounging with lush plantings and urns salvaged from the New York Botanical Garden, where the homeowner’s grandfather was a landscaper. 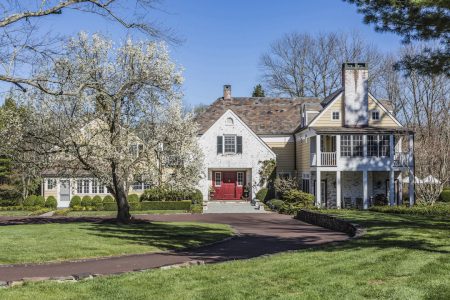 A specimen of Princeton’s early colonial history, “The Bouwerie” was the homestead for a Dutch farming family. Among other distinctive details, the original 1770 house features a remarkably well-preserved large hearth fireplace with beehive oven, hand-hewn beams, half-timberwork, and a “Jersey winder” staircase. The 19th century dining room showcases a magnificent Delft tile fireplace. The current owners completed a thoughtful addition to the original structure in 1991, which quadrupled the square footage. In the addition, reclaimed wood meticulously matches the original wide plank floors. The spacious new kitchen continues the historic farmhouse aesthetic, including an Aga cast-iron range and a breakfast nook enclosed with hand-made wooden animal moldings. A breathtaking stained glass skylight graces the new foyer and skillful trompe l’oeil painting of floors and walls is an exciting element throughout. Outside, the expansive property includes large patios, a pond, and an infinity pool that falls into a grand English knot garden.

Click here to learn more about sponsoring this exciting event.

Thank you to the Virtual House Tour’s generous sponsors!